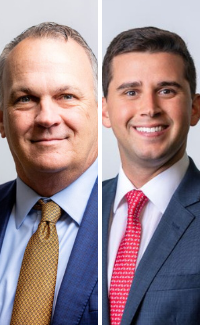 Richard Corcoran is the former Commissioner of Education for the State of Florida, where he served from 2018-2022. Responsible for pushing through several wide-ranging education reforms, including an overhaul of state funding for universities and colleges, Corcoran was considered one of the most impactful and prominent politicians appointed by Governor Ron DeSantis. Prior to his appointment as commissioner, he served as a Florida State Representative from 2010-2018. From 2016-2018, he was the Speaker of the Florida House of Representatives where he spearheaded over $10 billion in tax cuts, eliminated over 5,000 regulations, and passed the most robust ethics and transparency laws in state history.

“We are thrilled to have Richard Corcoran join the Continental PLLC team,” said Carlos Trujillo, founding partner of Continental PLLC. “Richard has navigated numerous government agencies as Commissioner of Education and as Speaker of the Florida House of Representatives. He has a proven track record of success and will be a huge asset to the team.”

Lazaro Fields served as an Assistant United States Attorney for the Northern District of Florida, where he prosecuted cases involving money laundering, corruption, fraud, violent crime, drug trafficking, and matters involving the National Security Division. His prosecutions were featured in national and international media outlets and he was recognized by the U.S. Department of Justice Office of the Inspector General for rooting out corruption in the U.S. Bureau of Prisons.  After law school, Fields served as a law clerk to the Honorable Federico A. Moreno of the U.S. District Court for the Southern District of Florida.

“Lazaro’s experience as a federal prosecutor brings a strategic edge to the Continental PLLC team,” said Jesus M. Suarez, founding partner of Continental PLLC. “His trial experience and ability to navigate the complexities of federal investigations will be invaluable to our clients.”

Continental PLLC excels at navigating clients through complex legal, political, and business environments in Florida, Washington D.C., and throughout Latin America and the Caribbean. Continental PLLC co-founders include commercial and bankruptcy litigation attorneys John Arrastia Jr. and Jesus M. Suarez, government and commercial litigation attorney Anne Corcoran, and Carlos Trujillo, a former member of the Florida House of Representatives and former U.S. ambassador to the Organization of American States. The firm has offices located in Coral Gables, Tallahassee, and Washington D.C.